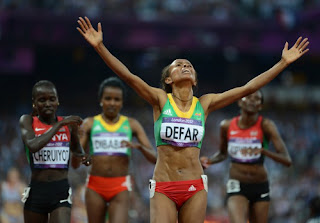 Just the other day, I happened to watch the live telecast of the women’s 5000 metres final at the London Olympics. The finishing line was just a few metres away and an Ethiopian runner was giving it her all, to be the first to cross the finishing line. She had left the other runners way behind… she ran and she ran and finally crossed the finishing line… first! Meserat Defar had indeed engraved her name on the Olympic gold medal. The moment realization dawned upon her that she had indeed won the race, she let out a heart rending cry, more out of disbelief than out of joy; and in the very next moment she demonstrated before the whole world watching her at that moment, the reason behind her winning the race. 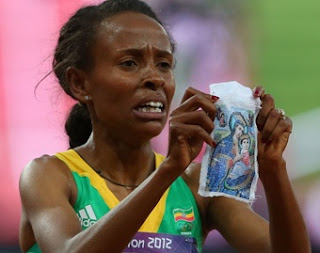 She took out a photograph of her God, that she had kept close to her heart during the entire race… as if to tell the whole world – “I won because of Him.” Although she may not have uttered a single word, her actions, emotions and the tears in her eyes said it all. It is indeed noteworthy that in all that euphoria of a famous victory, she had the presence of mind to, at that very instant, acknowledge her God’s grace behind her victory. Her joy conveyed that her untiring efforts had borne fruits, only because of her unwavering faith in her Almighty.
The result of the race had indeed come as a shock; everyone was stunned. More importantly, she had upset the favourite and winner of the 10,000 metre race and her compatriot, Tirunesh Dibaba. Steve Cram, BBC sports commentator and himself a great middle distance runner who represented England during the eighties, had this to say, “Goodness me, that was a shock result. Meseret Defar could hardly believe it. She has been second best recently but has somehow shown the form she showed in Athens. That is one of the big shocks of the Games.”
This was indeed a great achievement for her. It was a very emotional race. But when she showed the photograph of her God for all to see, I was reminded of my Sadguru and His words, “You and me firm together, nothing can stand in the way.. ever”. Defar’s achievement was indeed a testimony to Bapu’s (Aniruddhasinh) assurance. When He is there, nothing remains impossible. But for that to happen, one has to be prepared to put in untiring efforts. One also has to have unwavering faith in God and the willingness to readily accept a challenge. All we have to do is pick up the challenge; the Sadguru has already made all preparations to enable me to meet it successfully.
It is my Sadguru’s promise to me that “You and me firm together, nothing can stand in the way… ever”, but when will it be true? Only when  My Sadgaru  is my  priority, ‘the priority’.
Another thing I must mention about Meserat Defar is when, after the presentation of the gold medal, the national anthem of Ethiopia was being played, she broke down. As the national flag of Ethiopia was being raised, she became more and more emotional. We had already seen the intensity of her devotion to God and now we were getting to witness her patriotism. Defar had won by a huge margin; there was no competitor in the frame as she crossed the finishing line. She was never in danger of losing the race. Here I am reminded about Aadya Pipa Dada’s abhang, “When He places His hand on your head, how can fear ever remain?”
Sainath is always teaching us one thing or another through the various incidents that occur in our day to day lives. A major component of these incidents are invariably related to competition. This competition may relate to a sport or even where I am competing with myself. Whatever may be the competition and whatever plane it may be played, if we have to win, then His presence is absolutely essential. He is always there where the principle “Purity is the only decisive measure” exists; and He knows what is best for me and goes out of His way to make the impossible possible… this is probably what happened in the case of Meserat Defar!
ll Hari Om ll