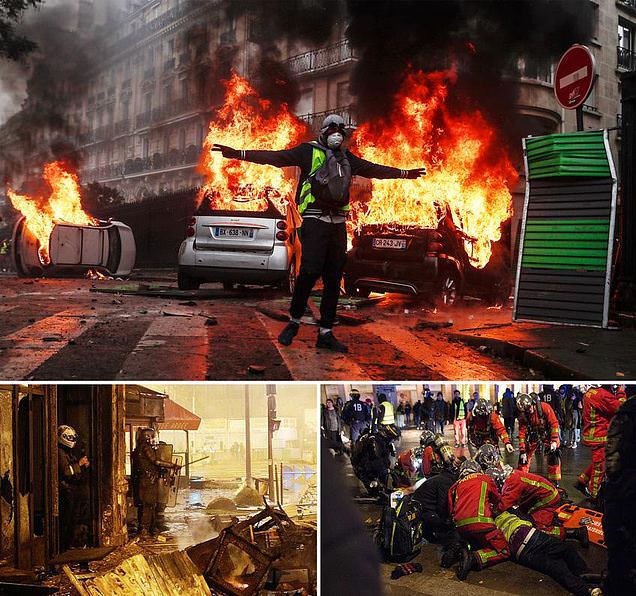 Paris – The agitators in France have sternly warned the French government in an aggressive tone saying that the demonstrations initiated against President Emmanuel Macron were the “beginning of a revolution”. Since the last two weeks, protests taking place in the French capital of Paris and its nearby regions have turned violent. As the aggression of the protestors has not subsided despite the measures taken by the security agencies, indications are that the option of clamping an emergency could be considered as the last resort.

The protests turned violent in Paris once again on Saturday as hundreds of protestors gathered in Champs-Elysees and resorted to arson as well as property damage. Also, violent demonstrators broke glasses of shops, buildings and vehicles with sticks and axes, setting hundreds of cars on fire which also include police vehicles of the police, the fire brigade and other agencies.

Paris – The one-man rule of French President Emmanuel Macron, who is known to be a staunch proponent of a liberal and capitalist economy, received a severe setback due to the violent nationwide protests. For the first time since he became the French President, there is a growing demand for his resignation from all quarters of the country. The circumstances have forced the French government to concede to the protestors and suspend the fuel tax hike.

Since the last three weeks, President Macron’s decision to increase the fuel taxes has spurred strong protests in different parts of France including the capital city of Paris. As the French government initially turned a blind eye towards the protests, the demonstrations became more aggressive in the last week. The roads, transport were stopped and blocked in Paris and other parts of the country. At the same time, thousands of people participated in the protests in Paris which began with sloganeering against the government.

Paris – The ‘Yellow Vests’ agitation continues to rage all over France including the French capital of Paris despite French President Emmanuel Macron having yielded to the protestors’ demand to suspend the fuel price hike. More than 10,000 protestors have taken to the streets for the fourth successive week, and the demand for the French President’s resignation is growing stronger. The nationwide protests which began with the fuel tax hike, have seen participation from teachers, students and even the police while analysts have raised the alarm over the extent of the ‘Yellow Vests’ movement becoming increasingly widespread.

A severe reaction emanated from around the country following President Macron’s imposition of the fuel tax hike. Following the resistance to it in October from some areas of France, the Yellow Vests movement directly hit the French capital of Paris. Earlier, the Macron government had ignored the agitation which began peacefully. The French government nevertheless has paid dearly for it as the extent of the unrest is increasing every week.

The JNU row and what lies behind it