Let us now go back 40 years. In the year 1974, some amendments were made to the “Congressional Budget Act” which was closely related to the financial proposal. It was because of these amendments that member of the cabinet got some powers to challenge the Financial proposals made by the President of the United States. These powers have been used extensively in these four decades. And the result of exercising such powers was the obvious “Shutdown” which brought the government to a standstill.

If one were to go back and check the history of the shutdown, one would notice that no sooner did these powers were exercised, than the shutdown seemed to have begun. Before the year 2013, over the last forty years, US had been on the verge of a shutdown like this a total of 17 times. These shutdowns include a shutdown of a day and also a shutdown of the highest number of days, albeit 21 days.

The reason for 2013 shutdown was the Healthcare Reform which was approved under the leadership of Barack Obama in the year 2010. This law is also known by the name “Obamacare” This law aimed at providing medical insurance to average American citizens. The opposition party of staunch Republicans had opposed this law right from the beginning.

The member of the Republican Party who had a bitter taste in their mouth about President Obama’s healthcare reform law began to construct hidden ways of attacking him.

At the beginning, the Republican Party attached an extra annexure to the financial budget proposed by President Obama. It was mentioned in there that if one were to conduct the financial proceedings for the subsequent year smoothly, the financial planning for the Healthcare reform needed to be cancelled. However, the members of the Upper House refuted this proposal. It was then proposed that the amendment for execution be postponed to the subsequent year. However, the Upper House of Parliament refused to think about it. It was because of this constraint, the American Congress could not pass the amendment after September 30, 2013. An obvious outcome of this incident was the historical Shutdown that began on October 01, 2013.

Almost after two days, the ripple effects of this shutdown began to emerge at an international level. Britain, Russia and China expressed their deep disappointment about these incidents. In spite of such reactions nothing much seemed to have changed in the political circles in US. During this period, American citizens and NGOs had begun to express their displeasure openly through rallies. International community and analysts began to warn that if this continued, along with the dwindling US economy, the international economy would also dwindle down.

For a total period of 16 days including work at NASA had come to a complete standstill. The side effects of this shutdown began to show in the space expeditions, research, international travel, and tourism. Some private sector organizations also indicated that they probably had to lay off their employees.

During this time, the pressure began to build on political circles from media, experts and various associations. In the end, the Republican Party in the opposition agreed to the interim solution and passed the amendment to begin government functioning and the Government began to function all over again on October 17, 2013. While the functioning of the Government was brought back on track on October 17th, it was also the beginning of emergence of the side effects of a 16 day shutdown. The United States Secretary of State, John Kerry and the United States Secretary of Defence, Chuck Hagel expressed frankly that the shutdown had deeply affected the international relations of United States of America. European and Asian friendly countries did not blink an eye lid in advising US political parties to be cognizant of international side effects of such a shutdown. Now after having had such a turmoil, if one were to think that everything would be fine in US, then that would be foolishness. The shutdown is not over, it simply has been pushed forward till end of February 2014. No one can guarantee that this would not ever happen again.

In sorrow, you are the sole source of support!
Jovari hya dehi shwaas, nija karyaas sadhuni ghyaa...
Bapu, you run to me whenever I am in distress!

Shutdown In US – The Special, The Astonishing and The Peculiar – PART 1 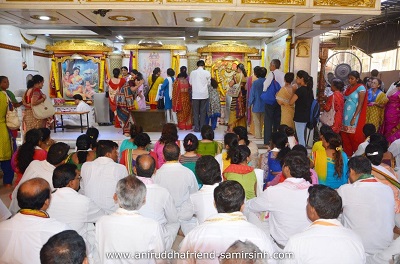