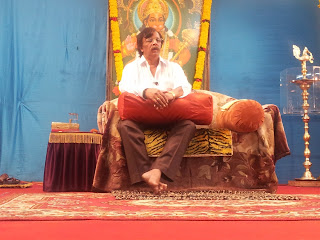 Yesterday, Bapu (Aniruddhasinh) came to Shri Harigurugram after a gap of two Thursdays. As we all know Bapu (Aniruddhasinh) is in the midst of his Upasana which commenced on the first day of the holy month of Shraavan (Shraavan Shuddha Pratipada) and which would conclude on the day of Dassera.

In the course of his discourse he dwelt upon the subject of how the world that we are born in and grow up is referred to as Mrutyulok (the mortal world). What Bapu (Aniruddhasinh) spoke thereafter is something that we must treasure and hold close to our hearts for the rest of our lives. Bapu (Aniruddhasinh) went on to say that starting today, there will be nothing such as death for the Shraddhavaan. Every Shraddhavaan will only be born, alternating between the two worlds, Mrutyulok and Bhargalok (the abode of Gods). This, he said, was the vardaan (boon) that his mother, Aadi Maata, Mahishasuramardini had granted him as soon as he started this Upasana on the first day of Adhik Maas; and with the granting of the boon, this Upasana concluded.

He said that henceforth for Shraddhavaans there will be no such thing as death. The Sadguru will hold the Shraddhavaans by their fingers and escort them upto the entry gates of Mrutyulokand when the ‘learning’ there is over, He will return to take each Shraddhavaan back to where he came from i.e. Bhargalok. This he likened to a mother dropping her child to school and then, at the end of the day, coming back to take the child home.

Bapu (Aniruddhasinh) then said that during the month of Adhik Maas, we must stand before the picture of Mothi Aai and affirm as follows, “I am never ever going to die; I am only going to live in both the abodes.” He said that we can do this as many times as we desire during Adhik Maas. Bapu (Aniruddhasinh) further stated, Every individual is born with the virtues (punya) accumulated in any past two births and sins of past two births. But now, with the boon that Mothi Aai has granted, every Shraddhavaan who is mine and who continues to remain so till the very end, in every future birth, will be born only with the punyaif the previous two births; all the sins committed by the Shraddhavaans will have been washed away before they are sent to Mrutyulok. Henceforth, they will be born in Mrutyulok only to experience happiness, joy and to do bhakti. They will not have to go through the grind of pain and agony for any sins committed by them in their immediate previous birth. 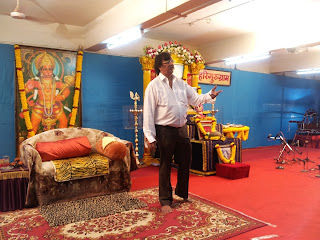 Thereafter the gajar, Jayanti Mangala Kaali Bhadrakali Kapalini to which all Shraddhavaans present danced to their hearts’ content in the company of their Sadguru, Bapu (Aniruddhasinh).

At the end of it, I was left wondering, what more could one possibly ask for? All the treasures of the world have no meaning and are worthless before what Bapu (Aniruddhasinh) has given us during yesterday’s discourse. So dear friends, let us make the most of what we have received now from Bapu (Aniruddhasinh) and convey this to all our Shraddhavaan friends who could not make it to the pravachan so that every one who loves Bapu (Aniruddhasinh) can benefit from this windfall that we have got yesterday. All that we have to do is to love him with all our heart, do his bhakti and continue to remain his till the very end.

This is yet another manifestation of Bapu’s (Aniruddhasinh) unconditional compassion for all his friends.