Skip to content
“O Subhata (Shreehanumanta – the supreme, the ultimate bhakta) lead me on the path of bhakti, show me the way to the bhagavanta. It is from You, that I want to learn bhakti” says Sant Tukaram in one of his compositions. Bapu (Aniruddhasinh) too has said time and again that it is guided by Hanumanta that every bhakta takes his first step or in other words begins his journey on the path of bhakti. And so Bapu (Aniruddhasinh) initiated for all His shraddhavaan friends, the ‘Shree Ashwatthamaruti poojan’ – the celebration of bhakti. In 1996 Bapu (Aniruddhasinh) initiated the Ramnavmi festival which was the very first followed by the Shree Ashwatthamaruti poojan festival in 1997. 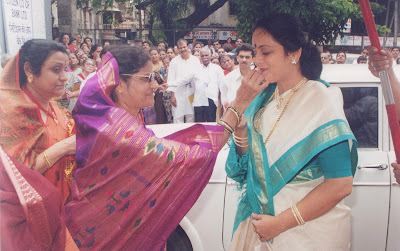 * A small idol of Shree Hanumanta is kept in a platter placed before the main idol of the Hanumanta sculpted by Bapu (Aniruddhasinh).
* A small sapling of the Peepal, a symbolic representation of the Ashwattha tree, is placed behind the idol of the Hanumanta.
* Sugarcane stalks are arranged around the idol as part of the decoration.
* The ‘Dhuni Mata’ is installed before the idol of Hanumanta. On this day the poojan is also offered to the ‘Dhuni’ i.e. Anjani Mata, the ‘Mata’  – the Mother of Bhagvan Hanumanta. A group of Prapathak do a continuous and uninterrupted recitation of the Shree Hanumanchalisa.
* Following the ‘shodashopchar poojan’ of Shree Hanumanta (shodash=16. the term ‘shodash+upchar’ indicates the 16 manners of offering the poojan), five unmarried men apply the ‘shendur’ to the idol coating it completely. All the shraddhavaan bhaktas too can then apply a little ‘shendur’ to the idol and take the darshan.
* After the poojan in the morning, a cyclical recitation of the Shreepanchamukha Hanumatkavacha then the Shree Sankatmochan Hanuman Stotra and lastly the chanting of the jap “Om Shreeramdootaaya hanumantaaya Mahaapraanaaya Mahaabalaaya namo namah” 54 times, continues throughout this day.
* The poornahuti (a rite that marks the conclusion and the fulfillment of the poojan offered) is done late in the evening at 9.00
* Every shraddhavaan bhakta can perform the ‘abhishek’ on the idol of the Panchamukhi Hanumanta.

Bapu (Aniruddhasinh) refers to Shree Hanumanta as His ‘Rakshakguru’, the guru who protects and it is for this reason that

Explanation to the Ghorakashtoddharan Stotra