Skip to content
ll Avadhoot Chintan Shreegurudevadatta ll
ll Om Namashchandikayaee ll
All other gods are illusory, unreal; the Guru alone is the God Eternal. Once you repose your faith in him, he will help you overcome even the pre-destined.
– Shri Saisaccharit (Chapter 10 Verse 4)
The Shreesaisachcharit holds ever so many verses that sing the glories of the Sadguru! But this one has been and will always be close to my heart. It is the one that fills my heart. In this one single verse, Hemadpant highlights the importance of the ‘Charan’, the Feet of the Sadguru. The bhakta ought to repose firm faith and trust in the Sadguru. Yes certainly but what exactly do these words imply? Where exactly does he submit and offer his faith and trust? This is the verse that answers these questions.
Hemadpant shares with us, his own special moment of grace –
Chapter 2 Verse 140
I was blessed, I experienced the touch of Sai’s Feet,
And His words of care, concern and love
That was the moment, the moment of the ultimate fulfillment; life struck the point of pinnacle
That moment on life was new.
I can say the same. On the day of the Gurupournima of 1997 I did the ‘padyapoojan’ (the poojan of the Feet) of my Sadguru, Parampujya Bapu (Aniruddhasinh). That was the ultimate fulfillment of life, where life reached the point of pinnacle and yes indeed this moment marked ‘a new beginning’, in fact ‘the beginning of a new life’. That my Sadguru gave to me the opportunity to offer the ‘padyapoojan’ after my Dada, is pure love, sheer compassion on His part. And today as we celebrate the Gurupournima, I am reliving that special moment. 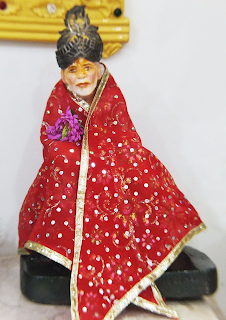 On Bapu’s (Aniruddhasinh) instruction, my father gave to me as the ‘guru mantra’, verse 152 of the 11th chapter of the Shree Saisachcharit.
Chapter 11 Verse 152
All your desires, even the unusual will be fulfilled
And thus ultimately rendered contented and free of them
You will attain to the state of intimacy with the Sadguru-parmatma – every moment and forever
And so the Ram-parmatma will make your heart His abode – every moment and forever.
This was what Sainath had to say about the tunnel under the Neem tree:
This is my Guru’s seat, my most sacred legacy
He then got the ‘paduka’ of Shree Akkalkot Swamiinstalled close to this very place at the foot of the Neem tree (the Gurusthaan)
On the occasion of the Gurupournima, I would like to share a few of my favourite verses that sing the glories of the Sadguru.
– Shri Saisaccharit (Chapter 1 Verse 57)
With devotion, offer at the Sadguru’s at the Sadguru’s feet your body, mind, worldly wealth, – everything, and dedicate your entire life in the service of the guru.

Chapter 18 Verse 21
Guru is the Mother; guru, the Father. When gods are angry, the guru protects and preserves. But when guru is angry, there is no one to protect. Always bear this in mind!
Chapter 19 Verse 74
It is not necessary to know the elaborate means of Knowledge, nor is profiency in the six shastras needed. There should be steadfast faith that guru alone is the Protector and the Destroyer.
Chapter 23 Verse 170
Listen carefully now, to what Kaka then said, as he dropped the knife, ‘Baba, your nectar-like words, are as dharma-shastra to us.
Chapter 23 Verse 171
‘We do not know any dharma other than that. And we are not ashamed or disgraced. Obedience to the guru’s Word is of the very essence; it is, to us, the Ved-shastra.
Chapter 23 Verse 172
‘In obeying the guru’s command lies the true discipleship of a disciple. This alone is our adornment, while disobedience to it, in any sense, is a stain or a blot.
Chapter 23 Verse 173
‘It may bring us pleasure or pain – our sights are not set on the consequence. What is in our destiny, will happen. We leave it to God.
Chapter 23 Verse 174
‘As for us, we know only one thing – to remember your name, all the time; to store your Divine Form in the eyes and to be bound to your Word, by day and by night.
Chapter 23 Verse 176
‘Even when the guru’s command is clear, the disciple who questions the propriety or impropriety, the good or bad of it, has, according to me, fallen from his duty.
Chapter 23 Verse 177
‘Disobedience to the guru’s command is in itself the fall from the Grace of the creature. Obedience to his command is the most vital part of conformation to the Shastras.
Chapter 23 Verse 178
The mind must always be concentrated at the guru’s feet – no matter, if life then remains or departs. The final effect, the ultimate end, he alone knows!
Chapter 23 Verse 179
‘Our gain our peril, we know not; nor do we know our own benefit or that of others. We only know, to carry out the guru’s work. And to us, that alone is our spiritual upliftment.
Chapter 23 Verse 180
‘Before guru’s word, rules and regulations, prohibitions and taboos are of no avail. The attention of the disciple must be focussed on the duty appointed to him by the guru. The burden of his difficulties rests on guru’s head.
Chapter 23 Verse 181
‘We are the slaves to your command and will not question what is proper and what is not. We will give our life, if need be, but will obey the guru’s word.

Chapter 25 Verse 60
Guru alone is our mother and father, the preserver and Protector, from innumerable births. He is Hari (Vishnu) and Har (Shiva) and also, Brahma. He is the doer and also the impelling force behind all action.
Chapter 32 Verse 81
“When the Guru alone is the object of meditation for the eyes and all else is as Guru himself, so that there is nothing separate from him, then it is called single-minded meditation.
The path that the above verses point to, is the path that will lead “every bhakta’s heart to become the abode of the Ram Parmatma”, I am sure. For Marathi version of this article please click here: http://samirsinh-dattopadhye.blogspot.in/2012/07/blog-post.html