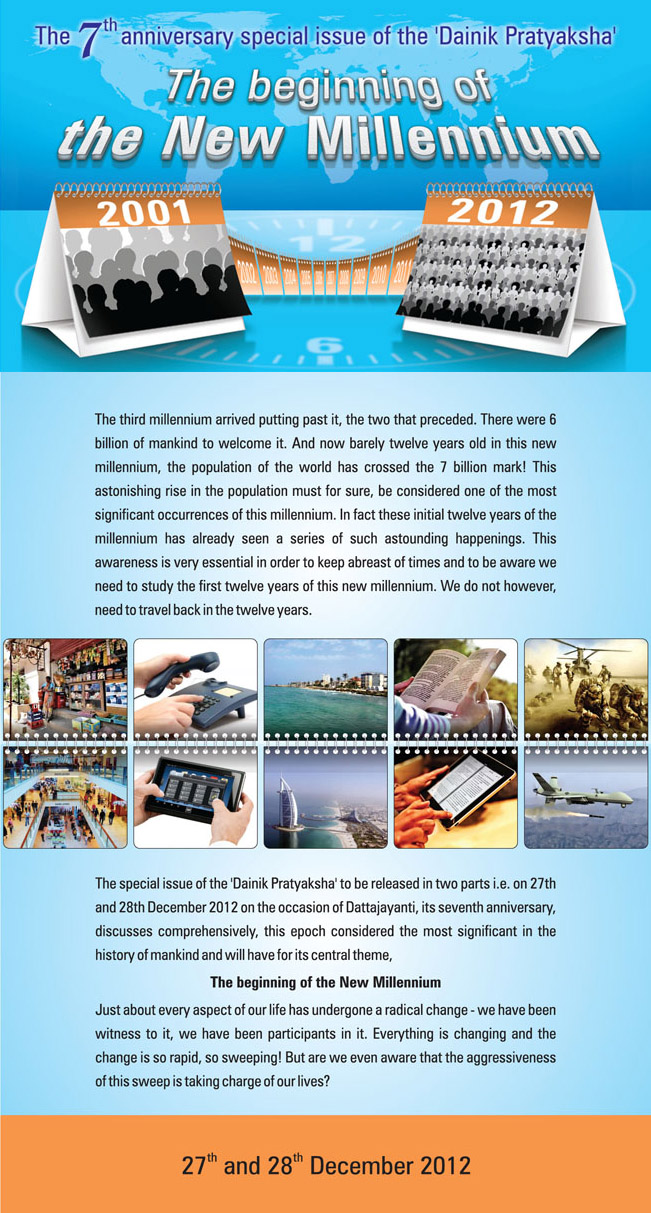 Today is the 15th of December and 7 years since the ‘Pratyaksha’ was launched. As is our tradition, this year too the Anniversary Special Issue of the ‘Pratyaksha’ will be released on the day of Shree Datta Jayanti i.e. the 27th December 2012 to be followed by its second part on the 28th. Pratyaksha’s journey over the last 7 years has been very innovative and truly remarkable and I am sure that is how it is going to be in the years to come. Pratyaksha is not merely a news-paper that reports current events. It is an alertness and awareness paper too, a daily that will keep the Shraddhavaans ever alert in the times to come. I am certain that Pratyaksha is going to prove a guide to the Shraddhavaans. Pratyaksha will be the medium that will convey Bapu’s words to His Shraddhavaan friends and so Pratyaksha will also become a support of the Shraddhavaans.
The years 2001 to 2012 have seen radical changes in almost every aspect of our life and that of the world. We have been witness to them, we have been participants in them. Everything around us is changing and the aggressiveness of this sweeping change has taken charge of our life. Bapu has, time and again, spoken to us about it and even alerted us about it. In fact Bapu began talking to us about it way back in 2001, i.e. when the changes had just about begun.
Hence this theme – “The Beginning of the New Millennium” – the theme that gauges the present situation and makes aware.
We are all waiting for Shree Datta Jayanti and we are all waiting for the anniversary special issue…
ll Hari Om ll