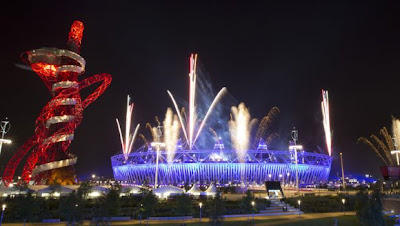 The opening ceremony for the 30th Olympic (Olympics 2012) have begun just now at London. I am sure millions of people must be watching the same across the globe & it will be a treat to watch them. Let The games Begin!!!!!
India’s greatest successes at the Olympics have come in men’s hockey. India won every men’s Hockey title from 1928 to 1956 but thereafter our performances have deteriorated for the reasons best known to all of us. In the last Olympics at Beijing, in individual events, we had won 1 Gold and 2 Bronze medals, thanks to the good performance in shooting and wrestling. We may expect a better performance this time.
Bapu’s (Aniruddhasinh) love for sports is already well known. He strongly advocates the importance of playing outdoor games and indoor games like basket ball, badminton and table tennis. He believes that a person learns “team efforts” and “team spirit” only through the sports. It also teaches everyone to accept defeat in a healthy manner as no one can win each and every game or match everytime. This principle is of utmost importance in life as often it is seen that continuous success makes a person indifferent, insensitive and intolerant. May be for the same reason Bapu (Aniruddhasinh) in his speech on Ramrajya, announced the formation of Aniruddha’s Institute of Bonsai Sports.
ll Hari Om ll

Sports, Bapu (Aniruddhasinh) and We