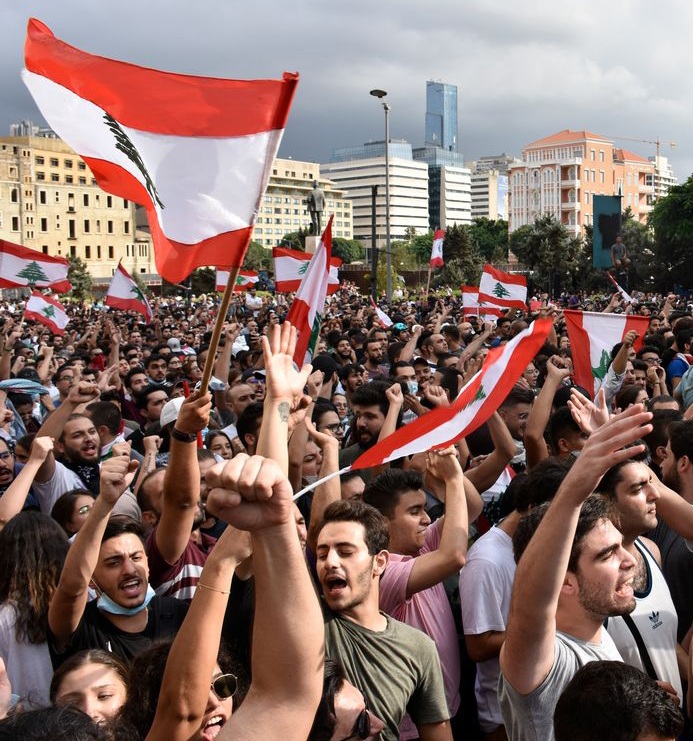 Beirut: Lebanese Prime Minister Saad al-Hariri declared that ‘I have failed to fulfil the demands of the Lebanese people, to control corruption and extremism in the country. I, therefore, surrender to the historic protests and submit my resignation.’ The protestors welcomed the resignation of Prime Minister Hariri and said that the protests would continue till the time all the other significant leaders resigned. Under such circumstances, the demonstrations ongoing in the country and Prime Minister Hariri’s resignation, has led the country towards anarchy, fears a Lebanon-based political analyst.

The people of Lebanon have called on anti-government protests for the last two weeks. The protestors demanded the government formed by the Future Movement Party of Hariri, in coalition with the parties of the ‘Hezbollah’ and the ‘Free Patriotic Movement’ (FPM), step down. The protestors alleged that the corruption peaked while the extremism exacerbated during the government’s tenure.

Iran blames the US, Saudi and Israel for protests in Iraq and Lebanon

Baghdad/Tehran: In the last two weeks, anti-government protests have erupted in Iraq and Lebanon. Iran’s supreme leader Ayatollah Khamenei has alleged that the protests were a plot of the United States, Israel, Saudi Arabia and their allies, to destabilise the two countries. By stating that Iran knew well how to crush such protests, the supreme leader has directed the Iraqi and Lebanese governments to initiate aggressive action.

Khamenei, the most influential person in Iran, has taken serious cognisance of the situation in Iraq and Lebanon. The supreme leader claimed that the protests were orchestrated to topple the allied pro-Iran governments in Iraq and Lebanon. Furthermore, he targeted Saudi and the other Arab states, asserting that the United States, Israel and the West had hatched the plot while Iran’s regional rivals had fuelled the protests.

Washington: In a report, the US State Department alleged that ‘Despite the US-imposed sanctions, Iran has not stopped funding the terrorists. Even today, Iran is providing $1 billion to the terrorists.’ The report claims that Iran finances the terrorist organisations in Lebanon, Iraq, Yemen and the Gaza Strip. Furthermore, Iran has been accused of funding Al Qaeda’s terrorist activities in Syria as well as in Afghanistan in the report.

Two days ago, the US State Department published a report titled – ‘The Country Reports on Terrorism 2018’. Nathan Sales, the US State Department’s coordinator for counterterrorism, informed that Iran was the biggest sponsor and supporter of terrorism. Also, Iran had funded terrorist organisations such as Hamas, Hezbollah, the Islamic Jihad, Houthi rebels as even groups in Iraq to the tune of $1 billion to expand its influence in the Middle East, the report said.

Tehran/Washington: Iran activated its Fordow nuclear project walking further away from the nuclear deal it had struck with the western countries. Iran has added to everyone’s worries by stating that they would now enrich uranium to 5 per cent and the United States issued a stern warning to Iran saying they were pursuing an incorrect path by initiating the uranium enrichment at the Fordow nuclear project. Even France, an Iranian supporter so far, voiced concerns over the country’s decision.

US President Donald Trump had imposed strict sanctions against Iran in September. After that, Iran had issued an ultimatum of 60 days to the western countries, which were a part of the 2015 nuclear deal, to get the sanctions withdrawn. Iran had warned the signatories that if their demands were not met, it would walk out of the nuclear deal.

Gaza/Jerusalem: Israel neutralised an Islamic Jihad commander, who was believed to have masterminded brutal attacks on Israel. After that, continuous rocket attacks were launched on Israel for the next six hours with Gaza firing nearly 150 rockets that landed on highways and civilian settlements. Israel provided details of the attacks and announced launching new attacks on the terrorist bases in the Gaza Strip.

Israel carried out an airstrike in Gaza’s Shejaia early morning on Tuesday. The Israel military, and the internal security agency, the Shin Bet informed that the Islamic Jihad commander Baha Abu al-Ata was killed in the airstrike. The airstrikes were carried out jointly by the two agencies. Baha was the top leader of the Islamic Jihad in Gaza and had ordered all the rocket attacks in Israel over the last few months.

Washington: The international organisation, Pew Research Centre’s report, stated that the number of unauthorised immigrants entering and living in Europe unlawfully, is nearly 5 million. According to the report, immigrants coming from nations such as Iraq, Syria, Afghanistan and Pakistan amount to more than 40% of the total illegal immigrants in Europe. Turkish President Recep Tayyip Erdogan had only recently threatened to release 3 million immigrants from the Middle East into the European nations. On the sidelines of the developments, the number of illegal immigrants in the European countries assumes much significance.

A massive flow of immigrants has entered Europe from 2015. The influx went out of control due to decisions the liberal European democracies had taken on immigrants, and the continent is now suffering its adverse effects. Immigration has sparked massive contention and divide among the European countries while some of them have banned entry to immigrants entirely by deploying military at the borders to prevent any unauthorised entry. However, the immigrant influx continues to infiltrate into Europe and all measures to curb them have failed.