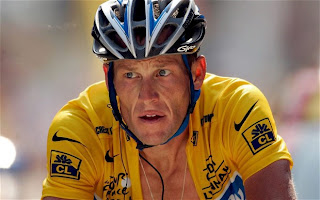 As I settled down today morning to read the newspaper, I was disappointed to read the news item, which said that Lance Armstrong, who was regarded as a legend, having successfully fought cancer and won seven Tour de France titles, had been found guilty of using banned substances during his career by the U.S. Anti-Doping Agency (USADA). Not only has he been banned for life, but even all his achievements in a 14 year old career had been erased in one stroke. This followed Armstrong’s refusal to challenge USADA, as also to exercise his last option of going in for arbitration. The stark reality is that Armstrong is now officially a drug cheat.

Armstrong’s seven Tour de France titles between 1999 and 2005 (after which he retired) had made him a hero and a beacon of hope to millions of people afflicted by cancer. Till now it was considered as one of the most incredible achievements in sports. He had become a role model to people from all walks of life; on how to achieve victory in adversity, whatever sphere of life may it be.
But now, with this revelation, which has come seven years after his retirement, it has become clear that Lance Armstrong too fell prey to the lure and temptation of the “win at all costs” culture. Whatever fame and goodwill that he had accumulated over the years had vanished in an instant. Not only that, he had been transformed from a hero to a villain, who had undermined the faith and the sentiments of all the people who had admired him, idolized him and put him on a pedestal. From being an object of affection he had become an object of hatred.
This incident reminded me of two or three similar incidents of cheating that had occurred in the past. One was Ben Johnson who won the gold medal at the Seoul Olympics in the year 1988, with a world record time of 9.79 seconds, beating the legendary Carl Lewis to second place. But minutes later, his urine sample showed that he had used an anabolic steroid called stanozolol. Ben Jonhson’s fall from grace was immediate.
Similar was the case with Marion Jones who won five medals in the 2000 Sydney Olympics but later, in the year 2007, in the course of an enquiry, admitted to the use of drugs even during the 2000 Olympics. Her husband and coach at the time of the 2000 Olympics, C. J. Hunter, who had also qualified to participate in the shot put event, had withdrawn at the last minute, citing knee injury. As it turned out, it was only a pretext to avoid being subjected to a drug test.
Back home, many of you must be aware of how a former India cricket team captain was banned for life for match fixing.
All this reminded me of two verses from Shri Sai Satcharita
असत्य, चालेना साईंप्रती l असत्यें नाहीं साईंची प्राप्ती l असत्यें जाणे अधोगती l अंती दुर्गती असत्यें ll (ओवी १३८ अध्याय ३८)
“With Sai, untruth will never work. The grace of Sai cannot be attained through falsehood. Untruth always leads to a downfall and in the end, life becomes hell. (verse 138, Chapter 38)

“Honour should be sought only at the doorstep of the Almighty; seek favours only before Him, strive to seek His blessings and do not hanker after worldly honours”. (verse 36, Chapter 6)
Both these verses hold great relevance to the subject that I have just dwelt upon. Untruth does not mean only telling lies. Hiding the truth and cheating are equally an untruth. Any success, that is achieved by straying from the path of truth and in violation of the divine principles; by embracing the “win at all cost” culture, is only short-lived and is bound to come back like a boomerang to bring out about a permanent fall from grace. This invariably happens during the lifetime of that person.
The story of Lance Armstrong should serve as a reminder to all those who are tempted to compromise on the divine principles and resort to short cuts, in the pursuit of material gains and success.
ll Hari Om ll