Hari om. We may not have quite followed the meaning today. That does not matter at all. (May we know that…..) this sukta is a depiction of ‘Shree’ – the original form of the Mother, my Aadimata and of Her daughter Laxmi who is on the mission with Her and for Her as also of Their form, of Their attributes, of Their tenderness and in fact of Their Being as such in entirety. Very pure and very sacred indeed! The Shreesukta works at 9 planes, through 9 channels and through 9 pathways. Also, it is by means of this very Shreesukta that the three Vedas, viz. the Rigveda, the Yajurveda and the Atharvaveda have made a provision of tremendous strength to enhance every aspect of ‘health’ per se and in every way. Moreover, ‘health’ here does not merely refer to the health of the body, it refers to the health of the mind, of the praan, of the pradnya and even that of our lifetime – our existence in a birth so to say. Further, ‘health’ here includes the health of any and every single circumstance or state in life, of our financial state, our intellectual capacities, our emotional capacities as much as and to the extent of the health of the atmosphere in our home. But then the Vedas are huge works, really voluminous and written in the Sanskrit of very ancient times, which even the Sanskrit scholars of today do not quite follow. Besides, it is not possible today to practice the prescriptions in them – the Ahnik, the Trisandhya, the Suryanamaskar and all the yadnya formalities could be deemed impracticable in today’s times. And the Sanskrit language is so flexible, it can be turned around as you like. For instance in Marathi, we say, ‘Ram eats a yellow mango and Gopal eats a papaya’ which is a simple sequence of words making an equally simple and straightforward sentence. That is how it is in English and in Hindi too. However, in Sanskrit, the word ‘Ram’ could be at one end of the sentence, the first word in the sentence could be ‘mango’ and the word ‘papaya’ could follow after another two words. So then, which one connects with which other? Is Ram to be connected with ‘mango’ or ‘Gopal’ with ‘papaya’ and how? There are rules that help decide this. But even today there are many who do not know them; even those who call themselves scholars do not. One word has several different meanings. Take the word ‘Naag’. ‘Naag’ is the cobra. But it also means the elephant and it also means ‘zinc’ which is a metal. Now, if the context is that a person made a certain article made from ‘Naag’, the reference has got to be to ‘zinc’. Besides, the word even refers to ‘ivory’ at times. What then? That surely spells a problem! To add to this, the grammar is quite difficult, very complex in fact.

At this point I want to share a story with you. This is how it goes. There is this queen who is very well-educated but the king she is married to, is not. He is very dumb. He does not know Sanskrit at all. One day, as the members of the royal family are bathing in the waters of a pond, the king playfully splatters some water on the queen. She exclaims, “Modakehi sinchayet!” At that, the king quietly orders his servants to bring him a whole platter of ‘modak’! They are after all the king’s orders and so the platter arrives at once. The king begins to toss modaks at the queen. The queen feels so disgraced. What she had meant was something totally different – She had said, “Modakehi sinchayet” that is “Ma+udakehi sinchayet” meaning “Do not splatter water on me.” ‘Ma’ in Sanskrit is ‘do not’ – ‘do not splatter water”. The women members related to her are all well versed in Sanskrit and so they get to know that the king, her husband is a fool. She is left upset. 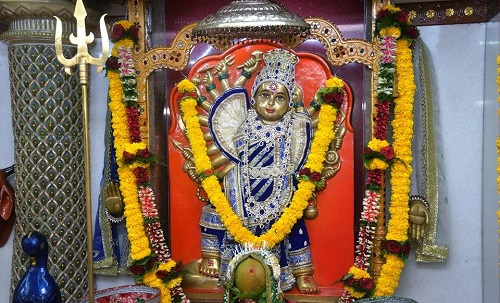 April 2017 From the Editor’s Desk Hari Om Friend, Its summer time and the heat has already begun to take its toll on the health of the people. Many people plan to move to cooler places during this period as most of the school examinations get over by April end and it is time for Summer Vacations. Vacation also means planning of various events. viz shifting of

Hari om. Shreeram. Ambadnya. Let us begin by listening to the Shreesukta. The Shreesukta! A unique and wonderful gift that is part of the Vedas – a gift that as the Upanishad and the Matruvatsalya say, came to us because of Lopamudra. The Shreesuktam is the poojan (worship), it is the archan (adoration), it is a stotra (a hymn singing praises) and it is a stavan (praises), it is just